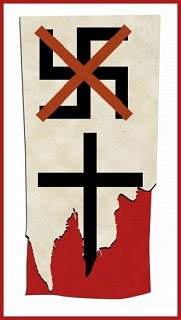 2 Timothy 3:1-2 – But mark this: There will be terrible times in the last days. People will be lovers of themselves, lovers of money, boastful, proud, abusive, disobedient to their parents, ungrateful, unholy… (NIV)

At the end of May in 1934, a group of Lutheran, Reformed, and United church pastors in the town of Barmen, Germany, gathered together to write a declaration against the prevailing ecclesiastical and political culture that was eroding the Christian Church and the German nation. They bravely spoke out against a growing fascism which was the outcome of years of decadence and economic disparity. The Church, which should have been neutral in order to confront any form of evil, had sold its soul to the emerging Nazi party. The frenzy of nationalism that Hitler successfully manipulated and stoked, penetrated and influenced the congregations of Germany. A disastrous syncretism took place where the Evangelical Church became the sycophantic mouthpiece of an evil which would tragically bring about a Second World War. The pastors in Barmen totally understood what was going on in their country, so they prophetically spoke out against their own church, in a brave effort to make their people understand that Fascism and Faith were not compatible in any shape or form.

Their courageous declaration cost many of them their pastoral positions and lives. Some were hounded out of their towns; others were arrested by the Gestapo; some were imprisoned, tortured, and eventually executed. Despite this persecution, they continued to speak out against the Church allying itself to Nazism. At the end of the war, those who survived were recognized for their persistence in presenting the truth, and for upholding the faith in a difficult and devastating time for German Christians.

Since then, different denominations throughout the world have adopted the Barmen Declaration into their approved list of historic Confessional creeds. They have done this to honor those Christian pastors and people who stood against fascism. The Declaration is also respected as a living document to remind Christians everywhere that aligning our faith with an unfettered nationalism can have disastrous consequences for the church, for the nation, and possibly even the entire world. In difficult times, the Church has to make difficult choices, but all of those decisions need to be based upon the character, teaching, and ministry of Jesus Christ, otherwise as a people and religious institution we can be easily led astray by charming demagogues and charismatic dictators.

How is my faith affected by current circumstances? In difficult times, where do I find God’s truth?

Prayer: Lord Jesus, we pray for the gift of discernment to enable us to see these times for what they are and to make right choices in our lives. Thank You for the courage of those Christians in the past and present, who have maintained their allegiance to You, in order to keep us true to our faith in You. In Your Holy Name, we earnestly pray. Amen.

Today’s image is taken from the PCUSA’s Book of Confessions. It is a church banner commemorating the Barmen Declaration. The Nazi Swastika is crossed out and the Christian Cross is rising above the flames of persecution. It is symbolic of rising against tyranny, as well as overcoming unjust persecution and war. If you would like to see more of the PCUSA’s confessional banners, please visit this link: PCUSA Banners.