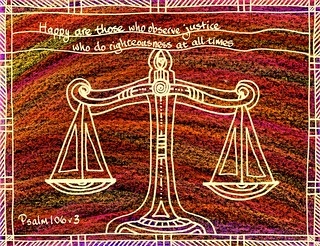 Isaiah 32:2 Each one will be like a shelter from the wind and a refuge from the storm,
like streams of water in the desert and the shadow of a great rock in a thirsty land. (NIV)

In Isaiah’s lifetime, life was very precarious because the people were subject to capricious kings and unjust sovereigns. God’s authority appeared to be usurped and the rulers of the day idolized themselves to such a degree that they led God’s people astray. The role of prophets like Isaiah was to interpret the times and let the people know that God was still in control. Despite the moral and religious failings of their kings, God’s presence was available to the nation and there would come a time when righteous rulers would shelter their subjects from injustice and release them from the emotional turmoil and spiritual wilderness that bad rulers and uncaring kings had caused.

God’s people were thirsty for justice and suffered under the harshness of their kings. They were meant to be a cherished religious nation where everyone served God and one another lovingly, fairly, and equally. Some of their kings understood that their role was to be an example of faithfulness to the people and that through their wise and benign rule, the people would prosper and the nation would be blessed. Other rulers though, treated their sovereignty as being sacrosanct, so they could not be held accountable nor confronted about their unjust ways. In such a climate, the people began to perish inwardly and lost their connection to God. Despair and desperation set in; truth was falsified and power was glorified. It was a morass of immorality which required God to send His prophets to speak out.

When Isaiah spoke about the coming of rulers of righteousness, he was letting his people know that God had not abandoned them and that those who spread malice, division, and discontent would pass away forever. In their place, would come kings of righteousness whose rule would restore the hope, strength, and confidence to God’s people. And ultimately, the last of those kings would be Jesus Christ, our Lord and Savior, who would finally bring God’s justice to the oppressed, the powerless, and the meager in order to show and prove that love conquers everything and everyone.

Point to ponder:  Where is Christ’s Spirit working for justice in our world today? How are we supporting and serving Him in that mission?

Prayer: Lord God, long ago You sent Your prophets to deal with unjust rulers and self-centered kings. You gave a word of hope to Your people that righteousness and truth would prevail, allowing them to remain confident in Your sovereignty over the whole Earth. Remind us of these blessings today. In Christ’s Name, we pray. Amen.