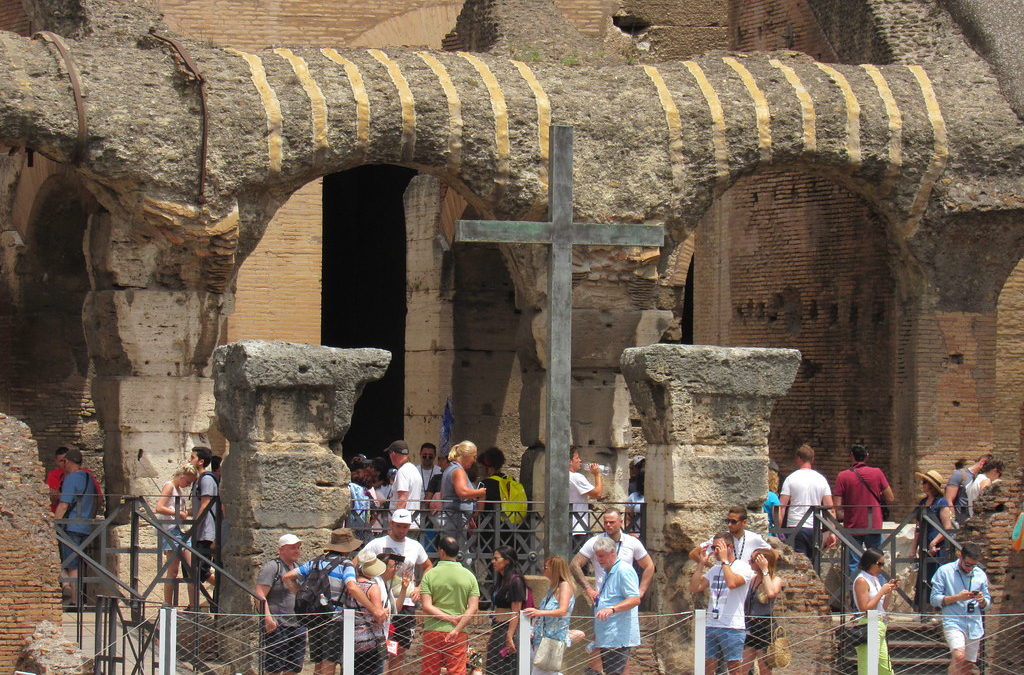 Romans 6:22 But now that you have been set free from sin and have become slaves of God, the benefit you reap leads to holiness, and the result is eternal life. (NIV)

When my wife Evelyn and I were in Rome this summer, we looked forward to seeing the wonders of that great city. Every corner and every street had something amazing about it, so we were often mesmerized by the history, architecture, and art of Rome. Like every other tourist, the one place that we had to visit was the Coliseum. It was magnificent and more than we had ever expected it to be. We had often seen it in photos or TV shows, but to be walking around this great wonder of the world was unbelievable. Even today, when we think about that visit, we quickly re-experience both the awe and joy we felt.

As we walked around the Coliseum and climbed the ancient stairways, we also felt a connection to the many Christians who were publicly martyred in the stadium. We couldn’t imagine what they went through and how much humiliation, pain, and horror they endured, but we were truly thankful for their great faith which persevered beyond the unjust persecution. They were courageous people and we will be eternally grateful for their true faith.

As I read this mornings passage from Paul’s letter to the Romans, I wondered how many of those persecuted had been among the first Christians to read his letter. His words must have meant a great deal to them, so much so that they were willing to lay down their lives for the God who enslaved them and the Christ who saved them. They understood that death was not the end, but for all of them who died in the Coliseum, it was the beginning of a new day, a new world, a new eternity with God and Jesus.

On the ground level of the Coliseum, just beneath the point where the Roman emperor doomed the early Christians to death, there is a large cross which can be seen from any point in the ancient building. It’s a beautiful testimony to the truth of Christ and a sacred memorial to those who lost their lives in the ‘eternal city’ of Rome but won for their souls the eternal Kingdom of God.

Point to ponder:  Who passed on the Christian faith to me? To whom will I pass it on?

Prayer: Lord Jesus, we are truly thankful for the sacrifices of Your followers whose personal commitment meant that Christianity would endure and survive. We are the beneficiaries of such wonderful disciples and devoted people. May we follow in their footsteps by passing on Your truth, way, and life to the next generations in our midst. In Your Holy Name, we pray. Amen.

Today’s image is a photo of the Memorial Cross in the Coliseum that John took from the other side of the vast Roman stadium. If you would like to view a larger version, click here: Cross.